2017. The year political culture, what felt like constant terrorist attacks, and the Weinstein scandal made it feel like the world was ending.

On the other hand, it was also the year I became Mrs Copley, backpacked around Europe and the year two of my best friends brought their first little ones into the world. Hello Luca and Polly!

So, without further ado, I thought I’d finish the year with a list of things that I’ve learnt this year:

Before the wedding, I was trying to lose a bit of back fat to fit into my frock. I joined the gym. I spent hours in the gym, going to the gym, showering after the gym, returning from the gym, and thinking about the gym. I even went to a spin class several times which meant I had to walk up the stairs to the changing room backwards, like someone who had just completed the New York marathon.

And guess what? SO BORING!!!!! OH MY GOD!!!! When the wedding finally rolled around, I told the woman on reception that I would be cancelling my membership. She asked “why?” To which I responded “I’m about to get married, and then I plan to get very fat.” I will summarise with a photo of Olive, from the immortal film: “Little Miss Sunshine.” 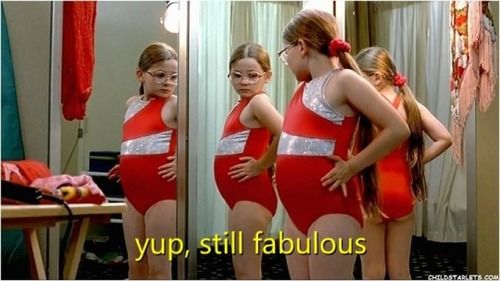 2. Plants are harder to keep alive than cats

This is a fairly self-explanatory point. What is it with plants at the moment? They’re very in, and I was eager to jump on the Jungalow bandwagon in turning the whole house green, which just resulted in a lot of death and destruction, and wasted money.

WHAT IS THIS BLACK MAGIC. I used to spring back, and be in a lecture at 9am after getting in at 4am. Now I am bed ridden for a day and a muggy head with terrible reaction times the day after that… It’s all downhill from here. Still no stopping me though. 🙂

4. Sometimes it’s okay to not read the news

I don’t know why it took me a while to figure this out. I’ve always felt it’s my duty as a literate citizen of the planet to be up to date with what’s going on in the world. But then I hit a point of earlier mentioned despair.. this sounds like an exaggeration, but I started to feel very anxious, not good in crowded spaces, etc. So I’ve decided to give myself permission to avoid the news when I feel like I need to.

5. It’s possible to gain a stone in three weeks

Ha. I’m actually quite impressed with this one. Over the course of our honeymoon, Mr Copley and I both put on a stone! HAAA! All the aperol spritz and deep-fried cheese of Europe took it’s toll in the end. Worth it.

A slightly boring one, but wow! That Urban Decay stuff is really bloody good!

This sounds obvious, but it’s taken me until the age of 27 to stop agreeing to everything and just do the things I want to do. Time is precious.

8. I will never be a professional wedding planner

(The above photo of Parker is an accurate representation of what wedding planning did to my brain.)

When planning a wedding, I was like “yeah nine months is ages, and it’s just a big party, what’s the big deal?!” Well… it turns out that having a wedding reception somewhere that rarely holds events is quite difficult, and you shouldn’t try to plan your own hen do on top of that. (bridesmaids to the rescue!) Anyway. I didn’t quite go full bridezilla, but as someone who is outwardly quite chilled, finding myself wailing “How on earth could all this hassle be possibly worth it?” a few days before my wedding came as a bit of surprise. I will never ever get married again. 🙂

In October, I found myself fairly addicted to social media. I was completely hooked on Facebook and Instagram, wasting precious time trying to prove something that no one cares about.

I’m my own boss and I work weird hours, and I would often just fall down the rabbit hole and spend hours online. Not only is this a massive waste of time, but it was also making me feel shit. No, I’m not interested in your before/after weight loss photo. You look great either way, and as Ruth so wisely says: “you are not allowed to be on a diet unless you have diabetes.” This whole wellness bullshit just makes everyone else feel inadequate and terrible for having a snickers for breakfast.

The news on Facebook is unreliable and untrustworthy. I’ve also found myself spending more time speaking to my friends and spending time with them in real life now I’ve taken a step away. I still pop online once a week or so, but I’m no longer hooked on the dopamine highs of getting a “like” and god, I feel so much better for it!

10. If you wear a really long wedding dress, you will spend your entire walk down the aisle trying not to faceplant

One last wedding-related one. Nobody tells you that when you walk down the aisle, you’ll have one hand holding flowers and the other clutching onto who is giving you away (thanks Daddy) for dear life. This means that your little toes are going step step step step on your wedding dress and you spend the entire thing going “oh my god oh my god I’m gonna fall, DAD! I think I’m about to fall over. Don’t let me fall over in front of all these people! If I fall, will you catch me?! Oh my god OH MY GOD.”

I didn’t even SEE Tom until I got to the end of the aisle. I could have been about to marry the wrong person for all I knew! Anyway. Advice to the future bride who may be reading (hey Leanne 😉 ) SORT OUT HOW TO WALK BEFORE YOU GO DOWN THE AISLE

11. My backpack is forever my happy place

Waking up and taking a few seconds to remember where you are. Having nothing to do in the day but explore and eat. Saving every penny I earn to explore.

Warning: count(): Parameter must be an array or an object that implements Countable in /nfs/c02/h05/mnt/39355/domains/heppyblog.co.uk/html/wp-includes/class-wp-comment-query.php on line 405

I'm Heppy, a 27 year old musician, bookworm and chai tea enthusiast. I live with my husband Tom, and our two black cats, Penny and Parker. Sometimes we go on adventures.